A New Frontier: The Moon Landing & The Rise of Stem Cells for COPD Treatment 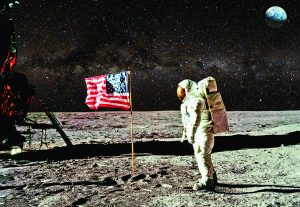 On July 20th, 1969 America did the impossible: it landed two men on the moon. To say this was an unfathomable concept for its time would be an understatement. In a time where basic computers filled entire buildings, the technology and know-how to launch a manned flight seemed decades beyond our grasp.
In truth, the Apollo Program was an extraordinary undertaking, exorbitantly expensive and on its surface only justified by the intensity of America’s competition with the Soviet Union. In 1967, two years before the Apollo 11 mission would land Buzz Aldrin and Neil Armstrong safely on the Moon’s surface, the Apollo 1 spacecraft developed a cabin fire during a launch rehearsal test, killing all three crew members aboard. Spaceflight could be a lethal game of trial-and-error, and a single miscalculation could mean the difference between life and death.
In one of the seminal triumphs of mankind, America pushed the bounds of innovation as the world watched in awe. It had conquered a new frontier. And though the Space Race ended in 1972, today we face a new frontier in the field of medicine – treating chronic obstructive pulmonary disease (COPD)–and thanks to clinics such as the Lung Institute (lunginstitute.com) the solution may have just landed.
Across the globe 600 million people suffer from COPD, and that number is rising. As a degenerative lung disease that develops from prolonged smoking or extended exposure to other air pollutants, a declining quality of life is an unfortunate reality for those with lung disease. With no known cure, treatment options are often disappointingly limited, and traditional medications fail to address more than the relief of symptoms.
Today in the field of medicine, something exciting is happening. Using stem cells extracted from a patient’s own blood or bone marrow, clinics like the Lung Institute are using these specialized cells to promote the body’s natural healing process, helping to relieve inflammation within the lungs and slow disease progression. Addressing COPD, interstitial lung disease (ILD) and pulmonary fibrosis, stem cell therapy is poised to challenge the status quo of traditional treatment options, and bring a higher quality of life for those with chronic lung disease.
As the field of regenerative medicine has grown and advanced, the Lung Institute—which currently specializes in the treatment of lung disease—has operated for over three years, and has worked to increase the quality of life of over 3,000 patients. Proud to exhibit an 83% success rate, the Lung Institute lives by the tenet of “pushing the status quo” in order to bring hope to people who may otherwise have given up.
Whether in medicine or spaceflight, innovation takes courage, not only to visualize the impossible, but to create it. For those with the memory of where they were when America first landed on the Moon, the feeling that anything was possible was inescapable. We had seen the impossible accomplished right before our eyes.
Although at times, the conceit of man can serve to be the catalyst of our own downfall, when combined with the bold and pioneering spirit synonymous with American ingenuity, history is made. The next frontier is neither Mars nor the outer limits of the universe; it is our health. As we continue to push innovation for the benefit of mankind, we are guided by the immortal words of John F. Kennedy:
“We choose to go to the moon in this decade and do the other things, not because they are easy, but because they are hard.”
And that is the American way.
If you or a loved one suffer from a chronic lung disease, the specialists at the Lung Institute may be able to help. You can contact the Lung Institute at 800-921-4631 or visit lunginstitute.com/health to find out if you qualify for these new treatments.

Share
Previous WHAT IS LYMPHEDEMA?
Next Medications and Foods to Avoid if You Have Heart Disease