Crohn's in the Small Bowel – Does it feel like you’re in the dark? 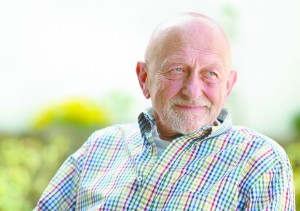 If you have Crohn’s disease, you aren’t alone. In fact, almost 700,000 people around the world have been diagnosed with this disease. And, it’s estimated that it may affect as many as 300.000 people who haven’t been. Because there isn’t just one test for Crohn’s disease, getting a diagnosis can often be a long and frustrating process.
All patients with suspected Crohn’s will have to undergo a colonoscopy as part of their initial diagnosis. However, if you are one of the 30% of Crohn’s patients with disease activity limited to the small bowel, PillCam SB may be an alternative to follow-up colonoscopies.
CROHN’S IN THE SMALL BOWEL
Crohn’s most commonly affects the terminal ileum, which connects the end of the small bowel and the beginning of the colon. However, it can appear anywhere along the gastrointestinal tract from the mouth to the anus. For75% of Crohn’s patients, lesions are found in the small bowel.
Crohn’s behaves differently in the small bowel than it does in the colon. Patients with lesions in the small bowel are at greater risk for severe disease progression. Because small bowel Crohn’s can be more severe over time, it’s important to catch and treat problems as soon as possible.
PREVENTING DISEASE PROGRESSION IS IMPORTANT
Preserving the small bowel is important. It connects the stomach to the large intestine and performs many functions, including absorption of nutrients during the digestion process. A host of malnutrition problems can arise depending upon the severity of damage done to the small bowel.
When you have Crohn’s, it’s important to feel confident in your treatment plan. One recent study showed that 62% of patients had their medication changed by their doctor because of the findings from PillCam SB.
Why PillCam® SB?
SHED SOME LIGHT ON YOUR CROHN’S
When you don’t know what’s happening in your body, it’s hard not to worry. The PillCam SB capsule endoscopy procedure is
a safe, simple way to view your entire small bowel from the inside out. Seeing parts of your body that you’ve likely never seen can give your doctor insight – and give you confidence in your treatment plan.
PillCam SB doesn’t require sedation, swallowing or injecting contrast media, or inserting tubes into your digestive tract. And, aside from fasting for 10 hours before the procedure (generally overnight), it requires no preparation.
EARLIER DETECTION OF PROBLEMS
Direct visualization of the small bowel mucosa is necessary to accurately and fully assess early disease activity and progression. PillCam SB is able to directly see the early stages of small bowel ulceration, where an MRE or CTE might not. Because PillCam SB can aid in the early detection of problems and early disease responds better to treatment, it could potentially improve your overall quality of life.
PillCam SB is the only capsule endoscope indicated for use in patients aged two years or older, making it an ideal tool for detecting and monitoring both juvenile and adult Crohn’s disease.
How PillCam® SB Works
With PillCam SB, you don’t have to go through a lengthy, uncomfortable procedure. You simply swallow a vitamin-sized capsule, and your doctor is able to directly view your entire small bowel – and see problems that are beyond the reach of other imaging methods.
ALMOST ZERO PREPARATION
Other than fasting for about 10 hours – usually overnight – PillCam SB requires little preparation. Although your gastroenterologist will give you specific instructions before your capsule endoscopy, an empty stomach allows for optimal viewing conditions. Your doctor will tell you how to prepare for the procedure.
The doctor or nurse will prepare you for the examination by placing sensors on your abdomen. The video capsule is swallowed with water and passes naturally through your digestive tract while transmitting video images to a recorder that you will wear close to your waist. The capsule then passes harmlessly from your body through a normal bowel movement.
SAFE, PATIENT-FRIENDLY TECHNOLOGY
The capsule is equipped with a miniature video camera and light source. It travels painlessly through your entire digestive tract. It captures images quickly and sends them to a recording device you wear during the procedure.
And, unless your doctor tells you otherwise, you can move around freely throughout the examination. PillCam SB is disposable and passes naturally through your body.
It really is that simple.
A 64-year-old patient had two massive lower gastrointestinal (GI) bleeding episodes. He had bloody stools and abdominal cramps. He had been hospitalized twice and had received a transfusion.
Even though this patient underwent numerous diagnostic tests for Crohn’s, PillCam SB was able to detect abnormalities in his small bowel where other methods failed. It helped prevent the risk of severe blood loss.
He underwent two colonoscopies and an upper endoscopy, but both returned normal results. A computed tomography (CT) scan and a small bowel series were also normal. Review of the PillCam SB images uncovered moderate to severe Crohn’s disease. After further confirmation with biopsy, the patient was started on medication. After a nine-month period, he underwent another capsule endoscopy with PillCam SB that revealed only mild disease severity. The patient has had no further bleeding.
This case report highlights the benefits of PillCam SB over other methods to diagnose ulcers of the small bowel. In this case, both the small bowel series and the CT scans failed to identify the site of blood loss.

Share
Previous Are Stem Cells the Next Penicillin?
Next Know Your Risk and Prevent Heart Disease