Are Stem Cells the Next Penicillin? 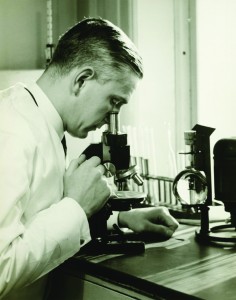 The discovery of penicillin was an early example of ground breaking
medical advancements changing the course of modern medicine.

Chances are that you have heard about stem cells—they have been in the news for years. But did you know that stem cells are being used right now in the United States to treat debilitating lung diseases? Sufferers of diseases like COPD, pulmonary fibrosis, emphysema and interstitial lung disease are receiving life changing stem cell treatments that just a few short years ago had not yet been thought of as possible.
With further advancements in the study of stem cells, the question is posed: are stem cells the next penicillin? Stem cells and penicillin both come from humble beginnings and accidental discovery, they are both used to treat life threatening conditions and diseases, and just like penicillin, stem cell biologists have won Nobel Prizes due to the practical uses of their discoveries.
Consider the history of penicillin. In 1939, while Poland was surrendering to Hitler’s Blitzkrieg German offensive, a Scottish biologist by the name of Sir Alexander Fleming was on his 10th year of studying his accidental discovery named penicillin. While on vacation with his family for the summer, Fleming left the cultures he was working on out on his lab workstation. Upon returning, he noticed that a fungus had started to grow on one of the cultures and commented, “That’s funny.”  After further study of the fungus, Fleming observed that the mold produced a substance that killed many disease-causing bacteria. Sir Alexander Fleming did not know the magnitude that his mold experiments would have in 1945 when the antibiotic would save thousands of lives on the French beachfront on D-Day. It wasn’t until that year, that Sir Alexander Fleming was acknowledged for his service to the medical field by being awarded the Nobel Prize. In the 1950’s a synthetic form of penicillin was first designed and mass production began to create the antibiotic at an amazing pace and for a relatively small expense. Since then, penicillin has been used in vast quantities around the world and has saved millions of lives.
Stem cells have also been studied extensively over time and have crept into the national dialogue as a buzz word for certain political agendas, particularly the stem cells found in fetuses. However, the actual stem cells that are now being used to treat  diseases in the United States, and the same cells that warranted the 2012 Nobel Prize in Medicine, are adult stem cells. This type of stem cell is found in fully developed individuals and flourish in all people regardless of age or health.
Most cells found in the body have developed into a specific type of cell, like a skin cell or a brain cell. At the turn of the 20th century, biologists discovered that some cells (stem cells) have not yet been assigned as a certain type of cell. They are simply blank cells standing by to meet your body’s needs. Stem cells being used to treat diseases can be traced back to 1968 when the first bone marrow transplant was used to treat a patient suffering from leukemia. Placing healthy stem cells into a sick individual’s body results in the creation of only healthy cells that are not infected with the disease.  In turn, these cells replace the diseased ones and start to heal the patient.
Today, one clinic, the Lung Institute, is using adult stem cells harvested from the patient’s own fat, blood and bone marrow to provide similar healing results for people with lung diseases. Their website, www.lunginstitute.com, states that they have treated over 500 patients to date. The physician gives the patient a growth factor that multiplies the stem cells into millions of healthy cells before extracting the stem cells from the patient, then they separate the cells and reintroduce them into the patient’s body. The result is that the healthy cells replace the damaged ones found in the lungs. Not only can this slow the progression of the disease, but it also works to restore lung function.
The Lung Institute’s Medical Director, Dr. Burton Feinerman, who has been treating patients with stem cells since the 1960’s, said, “Stem cells are very important because they offer a different approach. Instead of just treating symptoms and making the patient a little more comfortable, stem cells target the disease and can repair the damaged tissue. It is a whole new  ball  game  and  gives  people realistic hope that we can challenge the incurable.”
Just as people were wary about how penicillin might help fight infections when first developed, there is some hesitation that stem cell technology can help treat diseases. However, just like penicillin was recognized by the scientific community, so have stem cell developments. If the number of people successfully treated with stem cells already is any indication, then it will undoubtedly be heralded, like penicillin, as the ground breaking medical technology of its time.
If you or a loved one suffers from a chronic lung disease, the specialists at the Lung Institute may be able to help. You can contact the Lung Institute at (855) 914-3212 or visit lunginstitute.com/health to find out if these new treatments are right for you.

Share
Previous GO RED FOR WOMEN – Heart Health Guide
Next Crohn's in the Small Bowel – Does it feel like you’re in the dark?