Early Detection a Cause We Take Personally 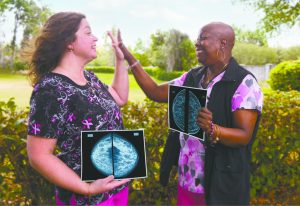 No matter who you are, breast cancer can impact your life. Whether it affects you or a loved one, it can be a shocking diagnosis, even for those with inside knowledge of how common it is, and how important the need for early detection. Just ask Yvonne and Michele, two beloved members of RAO’s very own healthcare team, who both recently discovered they had breast cancer.
“I was actually late getting a mammogram, because when you work in the medical field you tend to put things off because, you know, ‘it’s not going to happen to me,’” says Michele. “But when I went in for my 3D mammogram, it captured micro-calcifications in my right breast that required a biopsy. Since I work in the field, I was pretty sure the biopsy would come back positive, which it did. But the mammogram caught those tiny calcifications early, and because they were non-invasive, I was able to have a mastectomy and reconstructive surgery without chemo or radiation. The very day after my mastectomy, I was able to take part in the annual breast cancer walk RAO sponsors. It was extremely personal, because I was walking not only as an advocate of early detection, but also as someone who was likely saved by it.”
Not long after Michele’s ordeal, her coworker Yvonne was diagnosed with breast cancer. For years, Yvonne had been dealing with a problem that many women face – painful cysts in her breasts that would regularly need to be aspirated to relieve discomfort and ensure they were indeed cysts and not tumors. Because her symptoms were accompanied by changes to her left nipple, Yvonne sensed something was wrong and went to see her primary care physician, who immediately ordered an ultrasound exam. Yvonne’s doctor shared her findings with Yvonne’s Board Certified radiologist at RAO, who ordered a biopsy. “My results came back and I saw my own pathology and I knew then it was positive,” says Yvonne. “It was invasive ductal carcinoma which did not go into the lymph nodes. And all the beautiful people here [at RAO] were on it so fast I didn’t have time to worry about anything. Within days I was having chemo and later, surgery. Throughout I’ve maintained a positive attitude, which has been supported by everyone here. Michele, who was able to guide me through her experience, was a great inspiration to me.”
Both women attribute their timely diagnoses to the 3D mammography™ exam, RAO’s preferred choice for breast cancer screening because clinical studies prove its 3D imaging is 40% more accurate than standard digital mammography. RAO offers this more advanced and reliable screening exam at its TimberRidge location, as well as its Women’s Imaging Center, which delivers the region’s most comprehensive breast diagnostic services, such as breast MRI, ultrasound, PET/CT, stereotactic biopsy and much more, for quick and accurate diagnoses, as well as treatment staging and interventional therapies. RAO’s Women’s Imaging Center features a team of experienced radiologists who subspecialize in breast imaging for added accuracy, led by RAO’s Medical Director of Women’s Imaging, Dr. Amanda Aulls. “The support that I got from everyone here made all the difference in the world,” says Michele.
“They’re like family,” adds Yvonne. And, of her and Michele’s experience, she says, “It gives us a firsthand understanding of what so many women go through. And we can say to them, ”We made it, and so can you.”
“The earlier you find cancer, the better,” says Michele. “We both found it as soon as it came and we’re still here.”
Both RAO’s Women’s Imaging Center and TimberRidge Imaging Center provide routine screening 3D mammography™ exams by appointment or walk-in without a clinician’s referral, as early as 7:00 am and as late as 5:00 pm to fit busy schedules.
“When you catch breast cancer in time, there is hope,” says Yvonne. “And you won’t  find a better support system than the family  here at RAO.”
Radiology Associates of Ocala
(352) 671-4300  |  www.RAOcala.com

Share
Previous ORGANICS VS. SYNTHETICS: WHY IT’S IMPORTANT TO YOUR OVERALL HEALTH
Next Benefits of Home Health Care