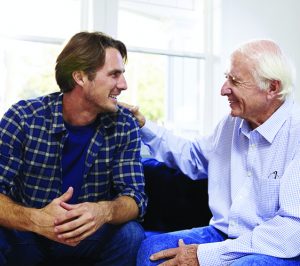 My dad told me a hilariously funny story that happened when he was about 20 years old. He was riding in the backseat of my grandfather’s car with my grandfather, Jeff, driving. Grandpa Jeff’s brother Uncle Walter was in the front passenger seat. So to set this up a little more, both Grandpa Jeff and Uncle Walter had suffered hearing loss. Uncle Walter’s was more severe but he did not wear any hearing aid devices. He would usually turn his “good ear” towards the person talking and with a little lip-reading understand what was being said.
So according to my dad, while they were riding along, they were having a conversation with both of them talking at the same time. Grandpa Jeff was quite the talker, so he continued on and on about something which Uncle Walter could barely hear out of his good ear which was towards the passenger side window.
Apparently, Uncle Walter heard just enough of Grandpa Jeff’s conversation to send him on a rabbit trail of comments back to him. My dad watched this going on for the better part of five to six minutes…of both men in the front seat talking as loud and as fast as they could…at the same time.
Well, my dad was trying to restrain himself from laughing. So he got down in the floorboard and covered his mouth.
The conversation going on in the front seat came to a grand finale of humor when my dad heard Grandpa Jeff say to Uncle Walter, “Well Walter if you’ll shut up a minute, I’ll tell you something.”
My dad could not hold it in any longer. He laughed so hard that his ribs were hurting.
Having watched Grandpa Jeff and Uncle Walter trying to communicate myself, I can see how side-splittingly funny this was to my dad.
Both my Grandpa Jeff and Uncle Walter loved each other dearly, so they never had any ill feelings for each other, but it sure was funny to us kids and my dad to watch them carry on a conversation.
My grandpa and great uncle both had hearing issues that were obstacles that, as they got older, hindered their communication. There are other obstacles that can hinder our communication to others that are even more powerful and can even be dangerous to our relationships.
Those would be what I call heart blockages. Heart blockages are for the most part unintentional and can happen slowly over time. Heart blockages occur when we have unresolved issues that we have not allowed ourselves to share with those we live and work with.
Without a little time to clear the air, we don’t always communicate well with one another. It’s like the emotions seem to block the words we need at the moment or we just cannot talk at all.
Heart blockages can happen between best friends, coworkers, and even between entire groups of people. And I believe that…
The person with the safe card starts by saying…”What I feel like saying is…”
Usually, a few things come from “safe card” talks like:
• Conflicts get resolved
• We develop better listening skills
• We learn to let go of unresolved resentment
• There is a sense of connection and bonding
• Empathy grows within us
• Constructive expression of our feelings
• Mutual respect and understanding grows
These types of heart blockages are not fatal to your physical health, but they can adversely affect a relationship.
Watch over your heart with all diligence, for from it flows the springs of life. Proverbs 4:23 NASB
So here’s to a lighter and happier heart that flows with the springs of life.
People can’t listen until they have been heard.
Now I’m like you, I don’t want to be blasted by someone who has pent-up heart blockages either. But I have realized that when I give someone a “safe card” to talk first and let them have at it…the following communication seems to be more clear, less emotionally charged and better relationally.
So how does the “safe card” work?
You sit with one other person or a group of people in an uninterrupted environment and you communicate the safe card rules:
1-only the person holding the safe card talks
2-no one leaves the room until everyone has been heard
3-you talk about how you feel
4-no criticizing or judging what others say
5-you pass the safe card to the left when you are through
6-everything said is confidential and stays in that room
To your spiritual health,
Alex E. Anderson
Senior Associate Pastor at
Bayside Community Church
Author, Dangerous Prayers
alex.anderson@alexanderson.org
www.dangerous-prayers.com
mybayside.church
Share
Previous InterCommunity Cancer Center Encourages Awareness of Bladder Cancer Symptoms
Next Millions of Satisfied Customers Worldwide Discover a Pain Relieving Device with Proven Results