I found it — The Secret to Anti-Aging! 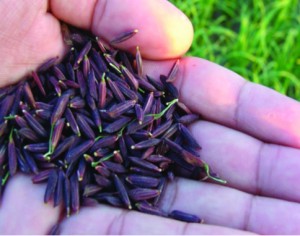 My cholesterol dropped by 73 points in 1 month, my husband’s morning blood sugar level dropped from 200 to 113 in 3 months, and we are feeling and looking so much YOUNGER!
A few months ago, my husband’s blood sugars were out of control after years of controlling it with diet. And his skin had taken on a yellowish-grey pallor… which showed me that his liver and kidneys were also in serious trouble. I was scared!
A friend stopped by, took one look at Charles, and said, “We have to get him on the Micronized Heart of Royal Purple Rice immediately!” Although I had never heard of it, I quickly said, “Get me some now.” I am so grateful that I did!
Within 3 weeks his skin was pink and glowing and he was feeling so much better. I also began eating it and began noticing more energy, sounder sleep, and improved skin.
But What Really Got My Attention…
We had our blood tested and after eating this rice product for only a month, my cholesterol had dropped by 73 points! I had been taking several other natural sup-plements for two years to lower cholesterol to no avail, but after only one month my cholesterol dropped to normal, as did my triglycerides, and three other blood markers that had been way too high. My doctor was shocked. He said no drug would give me those quick and dramatic results!
And Charles, with several medical conditions, had 10 blood markers drop significantly! My doctor said he knew of nothing that could work like that across so many body systems! “Not drugs…but real foods,” I said.
What’s In This Product and How Does It Work?
The basis of the product is a ancient, heirloom strain of royal purple rice that is now grown in Thailand in a pristine valley that has never seen chemicals, pesticides, or GMO’s.
Then, the purple husk, which is extremely high in antho-cyanin antioxidants, along with the very heart of the rice (the endosperm) is removed—this is the part that carries the super polysaccharide sugars and polypeptide amino acid building blocks. Everything else is discarded.
With only the dense nutrient rice heart left — this is then milled down to the size of a micron! That’s it—that is all that’s in this amazing raw natural product.
It is so tiny and powerful that when you eat it … it does not even have to go through your digestive system — it can immediately go into the cells and energize them! Like tiny arrows, these highly charged alpha glucan chains of super nutrients can pierce cell walls and furnish the mitochondria (the cell’s battery) with fuel to create massive amounts of ATP Light Energy, so that the cells can recharge, regenerate, and function at the highest level.
Recharge, Repair, and Regenerate Your Cells
The reason so many people who are eating well and taking good supplements are still sick is … nutrition can’t get into the cell!
A recent medical study showed — more than 80% of the population is insulin resistant at some level That means that the sugars and nutrients we need for energy cannot get into the cells. (If a cell phone battery cannot be recharged — it powers down and eventually dies). If you are tired, and have dis-eases that have names… your cells are also powering down and dying.
When the sugars (polysaccharides) can’t get into your cells to be used for energy, they cause another problem, too. They float around your blood stream, sticking to proteins and fats—or “glycating”. Wherever they stick they cause problems… if they stick in the bloodstream they cause hardening of the arteries and high blood pressure, in the brain they cause learning and memory issues or dementia, in the eyes—cataracts, in the skin—wrinkles. With my raw natural product you can recharge your cells and reverse the glycation and aging now!
Read What This Has Done For My Friends…
When I shared this with my friend, Bonnie, her body used the new cellular energy to reduce her blood pressure and smooth the wrinkles from her face. Nicole’s intense pain from an accident is gone and she is off her debilitating medications. Jeff is no longer experiencing acid reflux or gout. Dee Dee’s night blindness is gone and so are her allergies. Charles morning blood sugars have dropped from 200 to 113. I am looking so much younger that someone asked me if I had a ‘procedure’ done! Even my grand-daughter’s dog has gotten rid of his digestive issues because of this product. So … would you like to see what this amazing food will do for you?

www.KaresPurpleRiceProducts.com
Share
Previous Choose to Eat Heart Healthy — For Better or For Worse.
Next Just Who Gets Prostate Cancer?