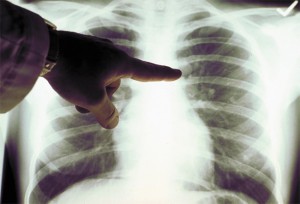 Approximately 219,000 people are diagnosed with lung cancer each year – over 103,000 women and nearly 116,000 men. Receiving a lung cancer diagnosis can be alarming. This article will provide some essential information to help you better understand your diagnosis. It is important to discuss treatment options with your doctor immediately. If you have any additional questions, please feel free to contact your doctor for help.
What is Lung Cancer?
Lung cancer is the uncontrolled growth of abnormal cells in the lung. Normal lung tissue is made up of cells that are programmed by nature to create lungs of a certain shape and function. Sometimes the instructions to a cell behave oddly and that cell and its offspring reproduce wildly, without regard for the shape and function of a lung. That wild reproduction can form tumors that clog up the lung and make it stop functioning as it should. Because of the large size of the lungs, cancer may grow for many years, undetected, without causing suspicion. There are two different types of lung cancer: small cell and non-small cell.
What are the Risks of Developing It?

What are the Symptoms?
Symptoms of lung cancer can include the following:

Choosing a Treatment
If you have small cell lung cancer, the main treatment will most likely be chemotherapy, either alone or with radiation. Surgery might be done if it is limited stage cancer. After the cancer is found and staged, your doctor will talk to you about treatment choices. Give yourself time to take in what you have learned. The most important things to think about include the stage and type of cancer, your overall health, the likely side effects of the treatment, and the chance of curing the cancer or helping you live longer. Age alone should not keep you from having treatment. Older people can be helped by treatment as much as younger people as long as their general health is good.
Treatment Options Surgery