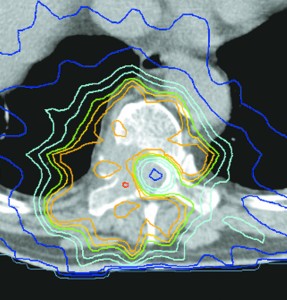 April is Oral, Head and Neck Cancer Awareness month and InterCommunity Cancer Center in Lady Lake, Fla., encourages education about these cancers including prevention, early detection as well as advanced treatment.
The American Cancer Society estimates more than 48,000 people in the United States will develop cancer of the oral cavity and pharynx (throat) in 2016. These cancers are more than twice as common in men as in women.
UNDERSTANDING ORAL, HEAD AND
NECK CANCERS
Oral, head and neck cancers usually begin in the squamous cells inside the mouth, the nose, and the throat, and also in the salivary glands, although less common. The area in which the cancer occurs describes cancers of the head and neck: oral cavity, pharynx, larynx, paranasal sinuses and nasal cavity, and salivary glands.
EARLY DETECTION OF HEAD AND NECK CANCER
Tobacco use is the most preventable cause of oral, head and neck cancer. In the U.S., up to 200,000 people die each year from smoking-related illnesses. While this number has declined due to Americans who have quit smoking, many smokers have begun using smokeless (vapor) or chew tobacco, assuming it is a safe alternative. However, this only changes the site of the cancer risk from the lungs to the mouth.
ORAL, HEAD AND NECK CANCER SYMPTOMS
According to Dr. Jeffrey Kanski, medical director and radiation oncologist at InterCommunity Cancer Center, “Fortunately, most head and neck cancers produce early symptoms and are curable when detected early.”
Symptoms of oral, head and neck cancer include:
– A lump in the neck that lasts more than two weeks
– Change in the voice such as hoarseness
– A growth in the mouth such as a sore or swelling that doesn’t go away
– Bringing up blood in saliva or phlegm for more than a few days
– Swallowing problems, or food “sticking” in the throat or esophagus
– Persistent earache or constant pain in or around the ear when swallowing
IDENTIFYING RISK OF HEAD AND
NECK CANCER
As many as 90 percent of head and neck cancers arise after prolonged exposure to specific risk factors. These factors include use of tobacco (cigarettes, cigars, chewing tobacco, or snuff) and alcoholic beverages as the most common cause of cancers of the mouth, throat, voice box, and tongue. Cancer of the throat can also occur as a result of infection with the human papilloma virus (HPV). Prolonged exposure to sunlight is linked with cancer of the lip and is also established as a major cause of skin cancer.
THE CORRELATION: HEAD AND NECK
CANCER & HPV
Over the past decade, an increasing number of young, non-smokers have developed mouth and throat cancer associated with the human-papillomavirus, or HPV. Each year, an estimated 26,000 HPV-
attributable cancers are diagnosed in the United States. HPV-positive head and neck cancers have shown to respond better to treatments like radiation and chemotherapy.
TREATMENT OPTIONS FOR ORAL, HEAD AND NECK CANCER
The three main types of treatment for managing head and neck cancer are radiation therapy, surgery and chemotherapy, with radiation therapy as a primary treatment.
“The optimal combination of treatment for a patient depends on the site of the head and neck cancer and the stage, or extent, of the disease,” said Dr. Kanski.
Oral, head and neck cancer is treated using Intensity-Modulated Radiation Therapy (IMRT), an advanced, high-precision radiotherapy treatment that delivers radiation doses to a malignant tumor or specific areas within the tumor and conforms to the three-dimensional (3-D) shape of the tumor by controlling the intensity of the radiation beam to focus a higher radiation dose to the tumor while minimizing radiation exposure to healthy cells.
An article published in CANCER, a journal of the American Cancer Society, shows significant benefits in using IMRT to treat head and neck cancers. The study compared the survival rates of 3,172 head-and-
neck-cancer patients for those treated with IMRT and those receiving conventional radiation treatments, finding a 38.9 percent survival rate for patients treated with IMRT versus an 18.9 percent survival rate for those receiving traditional treatment.
InterCommunity Cancer Center (ICCC) has 30 years of experience providing quality, personalized cancer care in the Lady Lake and Leesburg communities and has treated more than 10,000 patients. Radiation Oncologists Drs. Hal Jacobson, Jeffrey Kanski and Maureen Holasek bring exceptional expertise in treating many types of cancer including breast, lung, prostate, head and neck, and skin cancer. As part of Vantage Oncology, a national network of more than 50 cancer treatment centers in 13 states, ICCC has access to clinical information and best practices from the treatment of more than 1,000 patients per day enabling highly effective and peer-collaborated treatments.
To learn more about treatment for oral, head and neck cancer, visit www.ICCCVantage.com.
(352) 674-6300
www.ICCCVantage.com