Peripheral Vascular Disease A Stealthy Disease Not to Be Ignored 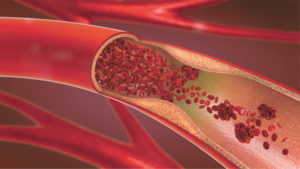 Peripheral vascular disease, or PVD, is a broad term that covers a wide scope of disorders affecting the blood vessels. Most often, PVD is caused by peripheral artery disease, which is a hardening of the arteries known as atherosclerosis. With atherosclerosis, fatty deposits in the arteries cause them to collect plaque, narrowing and blocking blood flow. Atherosclerosis causes a host of cardiovascular diseases, including PVD. PVD most commonly occurs in the legs, arms and vessels leading to the kidneys. Once a narrowing or blockage in an artery occurs, the affected area doesn’t get proper circulation, starving it of oxygen, a condition called ischemia.

Symptoms of PVD can vary, and usually appear gradually. For many, there are no symptoms at all in the beginning, making this a sneaky disease. People often first notice symptoms when walking quickly or for long periods and experience relief when they rest. Once symptoms remain while at rest, it is a sign that the disease has advanced.

Symptoms typically occur in the legs, arms, hips and/or buttocks and can include aching, cramping, tired “heavy” limbs, tingling, numbness, coldness of the skin, skin that takes on a pale or reddish-blue color or looks thin and shiny, thickened toenails, and wounds on extremities that are slow to heal and in very serious cases, become gangrenous. “One of the problems with PVD is that as many as 40% of people who have it experience mild to no symptoms” says interventional radiologist Dr. Kareem Bohsali. “That’s why awareness and diagnostic testing are so crucial, so we can spot disease before it progresses into something dangerous.”

People at Risk
PVD affects more than 8 million people, or roughly 1 in 20 Americans over age 50. Left untreated, PVD is a primary cause of disability. Though atherosclerosis is the leading cause, others include: diabetes, smoking, a personal or family history of heart disease and/or stroke, high blood pressure, insulin resistance, high LDL cholesterol and/or low HDL cholesterol, high triglyceride levels, being overweight, inactivity, blood clots, injury, infection, structural defects and diseases like Buerger’s disease and deep vein thrombosis, and venous inflammation from arthritis, lupus, varicose veins and other conditions.

Even people without these issues can develop PVD, especially as they get older. “Even if you feel fine, the possibility of PVD should not be ignored,” says vascular and interventional radiologist and Medical Director of RAO’s Center for Vascular Health, Rolando Prieto, MD. “Testing for PVD is the best way to determine its presence and extent. And any blockage in the vessels of the legs and arms can suggest possible blockage in other areas, which can lead to heart attack and stroke, so early diagnosis is important.”

Diagnosing PVD
CVH’s Board Certified interventional radiology team has years of training and experience diagnosing and treating PVD. CVH maintains ongoing accreditation from The American College of Radiology in key diagnostic procedures, for a superior measure of accuracy and quality in the following technologies:

MRI – Like MRA, MRI utilizes radio waves and a magnet to create images. MRI may be used instead of MRA for certain patients who need to avoid a contrast agent.

“We offer a full range of PVD testing,” says Dr. Prieto. “All are noninvasive and painless and don’t require the use of sedation, so most patients can drive themselves to appointments. Which test is used depends on a patient’s clinician’s recommendation, and is customized to their particular needs and circumstances.”

PVD – The Good News (Yes, There’s Good News!)
As dire as it all sounds, PVD is treatable and stoppable; better yet, when caught early, its damage is preventable. So don’t think of PVD as an inevitable part of aging, but rather a condition that may invite certain changes in lifestyle and, when warranted, medical treatment that in most cases doesn’t require open surgery.

Lifestyle changes – You’ve heard it before so we apologize for the repetition, but your life and function are important, so do your best to eat more vegetables, unsweetened fruit and whole grains and fewer red meats, processed foods, sugary foods and other less healthy choices. Get regular exercise, including walking. PVD can make activities uncomfortable, but keeping your circulation strong is a crucial part of limiting the disease from progressing.

Medication – Your doctor and you can discuss medications that may help reduce risk and symptoms.

Minimally invasive surgical options – The medical doctors of CVH provide safe and effective treatments for PVD, some of which may be able to be performed during the same appointment as testing. Treatment options from CVH include:

Angioplasty – Your interventional radiologist inserts a tiny catheter fitted with a balloon into the affected artery. The balloon is gently inflated to widen the narrow space, allowing better blood flow through the channel.

Stenting – In some cases, your doctor may place a small tube called a stent inside a blocked or narrowed artery to keep it open and functioning properly.

Atherectomy – With atherectomy, a tiny catheter is inserted into the clogged artery and a balloon is inflated to hold the space open. Your interventional radiologist then carefully shaves off the edges of the fatty clog, repeating the process until the artery is open enough to encourage healthy blood flow.

These treatments are relatively quick and usually require little downtime, making them safer and less invasive than traditional open surgery.

Acting today can prevent serious problems tomorrow. If you have symptoms of PVD, fall in a higher risk group, or are curious about your risk, talk to your medical care provider about diagnostic and therapeutic care from CVH. It can preserve not only quality of life, but life itself.

Share
Previous Dr. Orta: Boosting the Immune System Through Functional Medicine
Next How Compression Devices Can Help Your Circulation and Much More