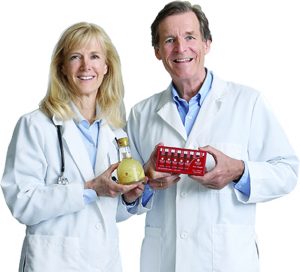 If you stare at a computer screen all day, have reached the plus-55-years-old stage of life and have had a cataract operation, it’s likely you have all the makings of a serious dry eye problem.
And you are not alone. Americans spend an astounding $3.8 billion on dry eye symptom relief every year. Unfortunately, the majority of dry eye treatments options, such as saline solutions and topical lubricants, can be inconvenient and uncomfortable to apply. In addition, the results are often disappointing.
New research on the dry eye front is prompting more ophthalmologists and optometrists to recommend another treatment option: Increase the intake of omega-3 from fish and fish/cod liver oil.
Why would getting enough omega-3 be important for helping treat dry eye symptoms? Because at the heart of most dry eye problems, chronic inflammation is wreaking havoc.
Inflammation in the Dry Eye
A long list of drugs, dry heat or air conditioning, long term contact lens wear, smoking, and diseases like Sjogren’s Syndrome all contribute to increasing the prevalence of dry eyes. However, the principal cause of dry eyes seems to be the dysfunction of the Meibomian gland, thanks to chronic inflammation.
The Meibomian glands are located behind the eyelids. Their role is to produce the fats for the tears, which prevents the tears from evaporating and leaving the eye surface unprotected.
Inflammation disturbs the production and secretion of the lipids emitted by the Meibomian glands. The Meibomian glands create a mixture of lipids containing cholesterol wax esters, diesters, triacylglycerol, free cholesterol, phospholipids and free fatty acids. When the inflammation kicks in, however, the quality of that lipid mixture is changed, making it stiffer and more viscous. As a result, the lipids cease to effectively protect the tears and eye surface, resulting in familiar dry eye symptoms.
Omega-3: The Body’s Natural Inflammation-Damper
It is worth noting most patients with dry eyes have an overproduction of inflammation signals, meaning the patient’s inflammation response is going into hyperdrive.
But what do the omega-3 fatty acids have to do with the Meibomian glands? Scientists speculate that the omega-3 fatty acids work in two different ways to reduce inflammation in the eye. First, the omega-3s suppress the inflammation within the Meibomian glands by inhibiting the inflammation signals. In addition, they also help the meibum lipids become more fluid.
The Research on Omega-3 and Dry Eyes
Besides exploring the theory behind how omega-3 works in the eye, researchers have also been studying the practical application of omega-3 supplementation on patients with dry eye symptoms.
So far, the results are quite promising. To name just a few:
One 2015 study suggested that omega-3 supplements could help relieve computer-related dry eye symptoms, adding more data to a growing body of research. A 2013 placebo controlled, double blind randomized study found that 65 percent of patients who received omega-3 supplements experienced significant improvement of their dry eye symptoms within 3 months.
Furthermore, an investigation on Meibomian gland cells showed that EPA and DHA from fish oil reduced inflammation markers. In addition, the researchers found that the EPA and DHA increased the production of Resolvin D1. This is significant since Resolvin D1 helps restore the tissue back to its non-inflamed state.
At Omega3 Innovations, we have also been doing our own research on dry eyes. In the spring of 2015, a pilot study using one vial of Omega Cure® Extra Strength (3000 mg EPA/DHA) once a day found that 70% of the participants experienced relief from the symptoms of chronic dry eyes within three to four weeks.
Quality, Consistency and Dose Matter
While the research on omega-3 supplements and dry eyes is exciting, it is important to keep in that mind that quality, consistency and dose do matter. Some studies suggest the anti-inflammatory effects of omega-3 don’t kick in unless you get a dose equal to at least 2700 mg of EPA/DHA (roughly 8 – 10 regular fish oil capsules) daily.
In addition, as the studies above suggest, consuming enough omega-3 isn’t a quick fix when it comes to improving dry eye symptoms. It may take anywhere from 3 to 12 weeks of consistent daily use before you start feeling a difference. Finally, using an oil with a low oxidation level (meaning a fresh oil) will increase the potency factor.
Considering the Future of Dry Eye Treatment Options
With the increasing use of computers and an ever-aging population, the number of people affected by dry eyes symptoms will undoubtedly continue to grow. To combat the issue, we will need lower cost, effective treatments options.
Looking at above research, omega-3 supplementation could be one such answer – and one that could have a bigger health impact than treating the eyes. As one of the participants in our study commented, using Omega Cure Extra Strength not only reduced her need for eye drops and gave her more comfort when using contact lenses. It also helped improve her focus and made her skin and hair softer.
About Anne-Marie Chalmers, MD
Anne-Marie Chalmers, MD, is the co-founder and president of Omega3 Innovations. Born and raised in the United States, Dr. Chalmers graduated from Brown University and completed her medical training at the University of Oslo in Norway. In Norway, Dr. Chalmers practiced emergency, family, and preventive medicine for many years. Her research and development work has included nutraceuticals (especially omega-3) and medical delivery device systems to facilitate ingestion of multiple medication combinations.
OMEGA 3 Innovations
941-485-4400
omega3innovations.com

Share
Previous Joint Injection: Relief, Directly Where You Need It
Next Got HEMORRHOIDS?