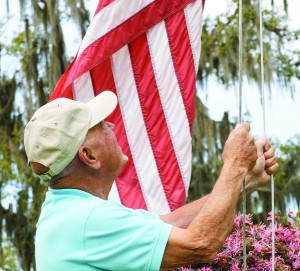 In the United States, we place the utmost value on independence and freedom, so much so that many young men and women have sacrificed their lives for it. The word independence has a different meaning to different people. For some, it means not living under the thumb of an oppressive government. For others, it means being able to share a thought or opinion openly. For senior citizens, it might mean being able to drive to the store and run errands, or even being able to live in their own home. As we age, day-to-
day activities often become more difficult, especially for those suffering from debilitating lung disease. However, lung disease does not have to mean a loss of independence.
Living independently as a senior requires coming up with a game plan and taking steps that preserve self-sufficiency. Some steps that seniors can take are: de-cluttering the house to avoid trips and falls, installing grab bars or handrails in the restrooms, using non-slip mats in the shower, and making sure that the things they use on a daily basis are easily accessible. Family members of seniors also play a key role in preserving their independence. For seniors who live alone, frequent check-ins are important, as well as carpooling and going for walks with family members or friends. Exercises like walking and stretching help prevent falls and promote healthy lung function. Although fear of injury may seem daunting, it’s imperative to keep moving to improve overall health. Sometimes independence just requires approaching life in a little bit of a different way. Many need help managing their activities and assistance in completing their everyday tasks. Someone coined the phrase, “asking for help doesn’t mean you’ve failed, it just means that you’re not in it alone.” This sentiment describes the essence of senior independence, particularly when it comes to lung disease.
It has been reported that 15 percent of seniors suffer from some form of lung disease. One third of that 15 percent suffer from severe respiratory problems, according to the U.S. Centers for Disease Control and Prevention. Dr. Norman Edelman, a senior medical advisor to the American Lung Association, commented, “There are a huge number of Americans that experience lung obstruction. It’s a major problem; it’s the third leading cause of death in the United States.” Oxygen is one of the building blocks of life, and without the ability to breathe, independence is impossible.
Today, new medical advancements are providing people with chronic lung disease options that were once not thought possible. A clinic in the United States, the Lung Institute, has helped lung disease sufferers using stem cell therapy. The procedure is a minimally-invasive, three day outpatient treatment that harnesses the natural healing ability of the stem cells that already exist in the body. Stem cells are harvested from the patient’s own fat, blood or bone marrow, and then reintroduced into the body. According to the Lung Institute’s website, www.LungInstitute.com, the treatment slows the progression of the disease, restores lung function and reduces inflammation. They claim to have completed over 800 treatments over the last two years, and most patients report an improved quality of life after undergoing treatment.
There are many fears and doubts that come along with aging, particularly for those suffering from lung disease. These fears, however, do not have to become reality, and living a free and unencumbered life with lung disease is certainly possible. With medical advancements like stem cell therapy, freedom is within reach.
If you or a loved one suffers from a chronic lung disease, the specialists at the Lung Institute may be able to help. You can contact the Lung Institute at (855) 914-3212 or visit lunginstitute.com/health to find out if these new treatments are right for you.