Breast Density – What It Is and How It May Affect You 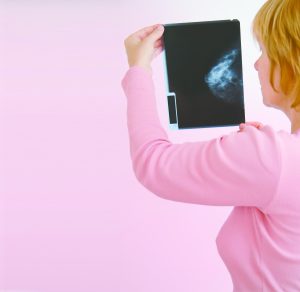 If you’re a woman who has had a screening mammogram and you live in a state that requires patients to be notified about their breast density (or have simply heard the term “breast density”), you likely have questions about what it is and what it means to your overall health.
It is estimated that as many as 47% of women have dense breasts, which indicates breast tissue that is closely compacted, oftentimes making it radiopaque, a medical term meaning it is invisible to radiation. In short, the denser one’s breast tissue, the less visible lesions are to mammographic imaging.
Dense breast tissue presents an increased risk of film mammography missing abnormal cells within normal tissue, meaning breast cancer, especially early cancer, may be hidden from view during screening. Because dense breast tissue contains more epithelial cells than fatty tissue does, and breast cancers most commonly affect epithelial cells, dense breasts may also present an increased risk of cancer, making early detection especially important. Therein lies the problem for women with dense breast tissue: there may be an elevated risk of cancer, and the cancer may be harder to spot.
The widespread replacement of film mammography with digital mammography has helped improve detection, but there is still concern about possible errors resulting in trying to assess a three-dimensional object like a lesion with the two-dimensional image provided by a standard digital mammogram.
The good news is that the Board Certified doctors of Radiology Associates of Ocala (RAO) offer the latest advance in mammography, Digital Breast Tomosynthesis, also known as 3D mammography™ exams. This revolutionary FDA-approved breast screening creates a series of images that are reconstructed on a computer screen to produce three-dimensional images of breast tissue, for clearer, more accurate imaging and easier, earlier diagnosis. Five different clinical studies have shown that tomosynthesis provides superior cancer detection and far fewer false positives – and the inherent stress that comes with them – than standard digital mammography. For women with dense breast tissue, it’s a giant leap forward in early detection.
RAO and the American College of Radiology recommend annual screening mammograms. If you have dense breasts or other reasons for preferring the enhanced accuracy of 3D mammography™ exams, you can make an appointment at RAO’s Women’s Imaging Center or TimberRidge Imaging Center without a doctor’s referral. To make an appointment and find out if your insurance covers tomosynthesis, call RAO at 352-671-4300.
352-671-4300 . www.RAOcala.com