EPA, DHA, ALA: How to Decipher the Omega-3 Alphabet Soup 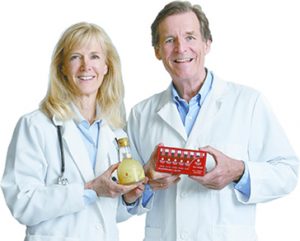 It’s easy to get lost in the alphabet soup of the omega-3 fatty acid world. Acronyms like EPA, DHA, DPA, ALA, and SDA represent just a few of the members of the omega-3 family – and even that abbreviated list is enough to give consumers and health practitioners alike a headache.
But what do all these acronyms boil down to anyway? Let’s straighten out some basic facts about these important fats.
EPA and DHA: The Omega-3 Superstars
For the last 40 years, the omega-3 family has had two main superstars: EPA and DHA. Naturally found in fatty fish and breast milk, EPA and DHA are considered the two most potent types of omega-3, and the majority of the omega-3 research to date has fixated on these two fatty acids.
EPA stands for eicosapentaenoic acid, and DHA is the acronym for docosahexaenoic acid (another tongue twister). Both of these molecules are polyunsaturated fatty acids, which is a fancy way of saying they have several reactive sites, or double bonds, that allow the molecules to quickly change their shape and connect with other important molecules.
EPA and DHA first sparked the interest of Danish researchers, Bang and Dyreberg, in the 1970s. At that time, consuming fat was thought to be a big no-no, and people believed that fat was the culprit behind the skyrocketing levels of cardiovascular disease seen in the Western world. Bang and Dyreberg analyzed the excessively fatty diet of Inuits in Greenland, where heart disease was almost nonexistent. Since the Inuits’ diet consisted of fish and seal – both rich in EPA and DHA – Bang and Dyreberg speculated that higher intakes of EPA and DHA reduced the risk of coronary heart disease.
Since the two researchers released their first paper, EPA and DHA have become the focus of thousands of studies on the heart, as well as the brain, eyes, and joints.
What Makes EPA and DHA So Powerful?
EPA and DHA influence thousands of gene expressions that involve fat metabolism, cell inflammation, and neuro signaling substances. Moreover, EPA and DHA reduce platelet stickiness, which allows the blood to circulate better. EPA and DHA also help the heart beat more regularly.
As one of my cardiologist friends quipped, “If everyone ate enough fatty fish or took fish oil regularly, we wouldn’t need to have so many defibrillators lying around.”
These two fatty acids are often characterized by their different roles in the body. DHA is found in greater quantities in the brain, eyes and sperm. Therefore, it is often studied in relationship to mental health, eye health and fertility. EPA, on the other hand, seems to have a stronger impact on reducing inflammation.
ALA: The Omega-3 Family’s Most ‘Immature’ Member
As the shortest-chained member of the omega-3 family, ALA (alpha linolenic acid) has significantly fewer reactive sites than the EPA and DHA molecules. Because plant sources like flaxseed, walnuts, and chia seeds, as well as fish, contain ALA, many food companies promote plant-based foods as a good source of omega-3s.
However, ALA does not have the same reactivity as EPA and DHA. For the ALA to be effective, the body has to convert it into the more powerful EPA and DHA. Depending on the genetic make-up of the individual and their diet, only about 0.2 to 7 percent of the ALA gets converted to EPA and DHA. In addition, some people don’t have the right enzymes available to elongate ALA to EPA.
The average American has to consume about a cup of flaxseed oil to obtain the same amount of EPA found naturally in one teaspoon of fish oil. Rather than suggest the public drink cups of flaxseed oil every day, most health practitioners agree it’s easier to get EPA and DHA ready-made from fatty fish or fish oil.
DPA: Another Important Omega-3 Member
Docosapentaenoic acid, or DPA, is a lesser known member of the omega-3 family, but it’s starting to get more attention as researchers are uncovering its benefits.
Like EPA and DHA, DPA is also found in fatty fish and seal, and it is formed in the omega-3 pathway between EPA and DHA.
Why Is This Important?
DPA retroconverts to EPA. Predominantly found in skeletal muscle, heart and kidney tissue, DPA is a potent inhibitor of COX-1, an enzyme which induces platelet aggregation. Moreover, this fatty acid has wound-healing abilities and helps with the formation of new blood vessels.
DPA is also involved in altering gene expression – especially genes that reduce the synthesis of fat in the body. DPA also plays a part in reducing the expression of inflammatory genes.
Choosing a Full-Spectrum Omega-3 Oil
There are several other named omega-3s, including SDA, HTA and others. Because they are found in smaller quantities in fish and fish oil, there is less research about these molecules.
In midst of the omega-3 acronyms though, it’s easy to lose sight of the main point: ‘Omega-3’ is a family of many members, and all the different members work together to keep the body functioning.
Omega-3 supplements that simply contain one of the members will likely be less effective than supplements or foods that provide the full spectrum of the family. The beauty of the omega-3 family lies in the synergy and the balance of the fatty acids that help the body reach its full potential.
About Anne-Marie Chalmers, MD
Anne-Marie Chalmers, MD, is the co-founder and president of Omega3 Innovations. Born and raised in the United States, Dr. Chalmers graduated from Brown University and completed her medical training at the University of Oslo in Norway. In Norway, Dr. Chalmers practiced emergency, family, and preventive medicine for many years. Her research and development work has included nutraceuticals (especially omega-3) and medical delivery device systems to facilitate ingestion of multiple medication combination.