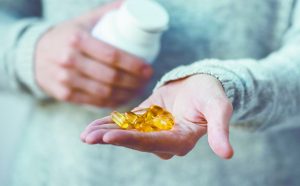 Recently, a fish oil manufacturer visited our Venice office and gave us two samples of a supposedly super fresh, award-winning fish oil.
Would we be interested in using the oil in our Omega3 Innovations products, she asked?
The lab data showed that the oil had been analyzed by a national company. And the results indicated that the oxidation levels were extremely low. As a matter of fact, the oxidation levels were lower than any value I had ever seen recorded — even lower than that of fresh fish just pulled from the water.
Of course, the data made me skeptical, so I tasted the oil. The strong flavoring, typically added to cover up a fishy taste, stayed on my tongue for hours.
Later that day, we analyzed the oil’s peroxide and anisidine values to determine its oxidation level. Instead of their claimed anisidine value of 0.1 (an impossible number), we found that their anisidine value was more than 200 times higher. As for the peroxide value, it was outside our measurable range, exceeding all freshness guidelines. No wonder the oil needed the heavy flavoring as a cover up!
So was this supposedly pristine oil a pure fraud or the result of ignorance?
The Rampant Rancidity Problem
If the above story sounds shocking to you, it’s actually not all that surprising when you look at the state of the omega-3 industry today. Studies from New Zealand, South Africa, and Norway have analyzed the omega-3 products on their markets, and the conclusions are concerning.
In New Zealand, researchers found that 83% of the products exceeded recommended peroxide levels. A similar study from South Africa reported the number at 80% for their over-the-counter fish oil supplements. In Norway, the homeland of fish oil, the results were even worse. A 2009 study demonstrated that over 92% of the products surveyed exceeded recommended industry levels.
More troubling were the results from a recent Canadian study. This study found that omega-3 products marketed towards children had the highest oxidation values of all.
Understanding Peroxide, Anisidine & TOTOX Values
Thanks to scientists raising concerns over the volume of poor quality, rancid fish oil capsules, the omega-3 industry has recently started to push back. Many fish oil manufacturers, like the one who visited our office, are starting to talk about the oxidative status of their oil. This is a positive change.
For the consumer, however, it can also be confusing, especially when plenty of fish oil products claim to be fresh. What does it mean for an oil to be fresh? And how do we know what to trust?
Freshness and Rancidity Basics
Many people are not aware that freshness is not a purely subjective topic. It is something you can measure. In terms of omega-3 oils, the three most common measures of rancidity are peroxide, anisidine, and TOTOX values.
What do peroxide, anisidine and TOTOX values mean for oxidation?
When oils oxidize, they create new byproducts that don’t exist in fresh oil. These byproducts typically give off the taste and smell associated with old, rotten fish. The peroxide and anisidine measurements give an indication of how many of these byproducts have formed in the oil. The TOTOX value, which is calculated using the peroxide and anisidine measurements, provides an overall picture of how fresh the oil is.
What should the peroxide, anisidine and TOTOX values of a fresh oil be?
As a rule, the lower the oxidation numbers, the fresher the oil. GOED (the omega-3 trade association) recommends a peroxide value of 5 meq/kg and anisidine value of 20 meq/kg as its upper limit. But it’s worth noting that some experts believe the values should be lower. Omega Cure® typically has a peroxide value of 0.1 meq/kg, which explains why the oil has no fishy taste or smell.
What is the problem if an oil’s oxidation numbers are too high?
As oxidation occurs, an oil’s EPA and DHA content also decreases. Since the EPA and DHA molecules are the main workhorses of the omega-3 family, reduced EPA/DHA content means reduced efficacy. Furthermore, many scientists believe that excessively oxidized lipids could cause adverse health issues. Newer research has linked oxidized fatty acids with Alzheimer’s disease, elevated cholesterol levels and cancer.
The peroxide, anisidine, and TOTOX values are not the only ways to measure an oil’s oxidation levels. These numbers are simply the most accessible to measure, requiring minimal equipment. Still, the tests aren’t perfect. For instance, if an oil contains lots of flavoring or additives, it can impact the reading of the anisidine and TOTOX value.
Using the Taste and Smell Test
As helpful as oxidation values are in determining the freshness of an oil, you can’t just rely on the reported value to determine quality. This is because oxidation values are constantly changing. An oil might have a peroxide value well below the recommended 5 meq/kg before encapsulation and bottling. But by the time that product has gone through its final processing and waited on a supermarket shelf for several months (or years, as the case may well be), that number will likely be much higher.
One study from Poland found that fish oil capsules developed peroxide levels 20% higher than their initial values within 22 days of storage. And these were fish oil supplements that had been stored at room temperature in air-tight containers with limited exposure to light.
While not foolproof, tasting and smelling the oil is probably the best way to assess a product for a regular consumer. Just like fresh fish, a truly fresh fish or cod liver oil should have no fishy taste or smell. And it shouldn’t need to be covered up by heavy flavoring or a gelatin capsule.
About Dr. Bo Martinsen
Bo Martinsen, MD, is the co-founder and CEO of Omega3 Innovations. Born and raised in Norway, Dr. Martinsen received medical training at the University of Bordeaux in France and at the University of Oslo. Dr. Martinsen has extensive experience practicing general and preventive medicine. He has served as a medical consultant to large international corporations focusing on stress management and synergistic medicine.

Share
Previous Gifts that give back all year long – New children's toys and books help fund child medical grants
Next 24/7 Fitness Wants To Get You Healthy In 2018!