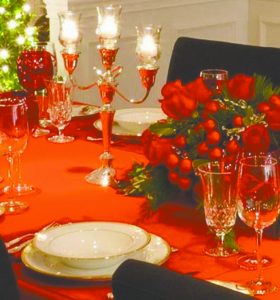 I don’t know if I’ve mentioned this, but my mom is an incredible Monopoly player. I mean she is phenomenal. And one of the things I enjoyed growing up was sitting at the kitchen table. I’m not just talking about Mom’s amazing cooking. I loved the kitchen table because that is where all the entertainment happened. When I was growing up, there was no Internet, no cell phones…shoot, I don’t think there were even interstates then.
We had to create our own entertainment. So the kitchen table was fun because we would play Monopoly, cards, checkers, lots of board games. It was in those times that I learned how to communicate, to negotiate, to win, and to lose.
My mom wouldn’t give you an inch of grace when playing a game. She would beat you and take all your Monopoly toys away. As an early teen while playing with her, I was down pretty bad. I was running out of cash and I had landed on one of her big red expensive hotels on Park Place…ouch! I was trying to make a deal with her. She mortgaged me to the hilt …she knew the next time around I was toast. And sure enough she wiped me out…with a big smile on her face. I was so mad. I sat there fuming. She looked at me and said, “Why are you so upset?” I said, “Because you didn’t let me win!” She said, “I am not supposed to let you win. If I let you win, I would be doing you the worst service in the world, Son. You know you wouldn’t feel good about it if you didn’t win on your own merits.” My mom is a wise lady.
The kitchen table is where the family culture is passed down to the next generation. Think about this…before there ever was a church or a community, as we know it, God created a family with Adam and Eve.
It’s at the kitchen table, with all personal electronics in the “off position, please,” that we first learn healthy relationship skills and values; not in universities, sporting events, or in corporate America.
Children learn from their parents and the parents learn from the grandparents and so on and so on.
“Teach a child how to follow the right way;even when he is old, he will stay on course.”
(Proverb 22:6 (Voice)
In the book, Lincoln On Leadership by Donald T. Phillips, I learned these thoughts about Lincoln:
Abraham Lincoln developed the love of writing and communication that later helped him to become a president of the United States by his mother reading and teaching him to read the Bible. He also learned something else. His father was a harsh man…very critical. Senior Lincoln had a very difficult life and was barely able to take care of his family. Abraham also learned to be very critical.
Later in politics, young Lincoln was very critical towards others in his public speaking. He would even take out ads in the newspaper and publicly slander people. This got him into a pistol dual where he almost lost his life.
That event shook him up and caused a change, but here is the cool thing; because his mom taught him to read the Bible, he learned that criticizing people does not honor God.’
As a matter of fact, during the Civil War, the South had gotten into a position where it would have been really easy for the Union to stop a lot of bloodshed. Atlanta would have never been burned and a lot of other terrible things could have been stopped very early on. Robert E. Lee was positioned in a particular place and the timing was perfect to take him out. So Lincoln immediately sent word to his general with intelligence on how to proceed. Well, his general decided to do what he wanted to do instead, and it literally prolonged the war for years.
Rightfully so, Lincoln was very angry. He wrote a rebuke to this guy…something to the effect of, “You don’t realize this, but by not doing what I asked you to do, you let Lee get out from under us. Because of this, there is no telling how many lives and resources we’ve lost, or how much destruction is going to take place in the next few years. We could have ended this war, but you did not do what I asked you to do.”
Care to guess how the guy responded to the letter? He didn’t. Lincoln never sent it. He had a changed heart when it came to criticism. Even under huge duress as president, Lincoln dealt with his subordinate as a life-giving person, which he learned at the kitchen table.
Do you have a Life-Giving kitchen table? If not, why not make it a goal for this month? Until next time…
Be Life-Giving!
To your spiritual health,
Alex E. Anderson
Senior Associate Pastor at
Bayside Community Church
Author, Dangerous Prayers
alex.anderson@alexanderson.org
www.dangerous-prayers.com | mybayside.church
To read other life-giving articles by Pastor Alex, go to http://belifegiving.blogspot.com/

Share
Previous Staying Fit Through the Holidays
Next Winter Itch