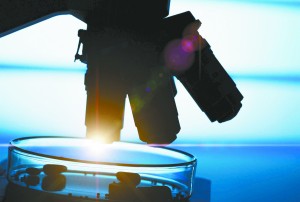 When people are diagnosed with chronic diseases, the challenge of living life fully, navigating the healthcare industry and finding the right treatment options can pose issues. For people with lung diseases, treatment options which address the disease itself are scarce and don’t usually go beyond traditional medications, supplemental oxygen or a lung transplant. Even Hollywood has taken notice of how this lack of treatment options affects people.
Movies like Dallas Buyers Club illustrate the struggles of being diagnosed with a chronic, progressive disease with few treatment options. The main character, Ron Woodroof, was diagnosed with acquired immune deficiency syndrome (AIDS) in 1986. At the time, there were limited treatment options available. Even with a terminal diagnosis, Woodroof refused to succumb to AIDS without a fight. He started to research various medicine and drug combinations, none of which were available in the United States at the time.
Through his research, Woodroof discovered medications that were available in other countries but not yet available in the United States. Along with his doctor and another patient, Woodroof founded the Dallas Buyers Club in 1988, providing AIDS patients with smuggled medications to help ease their symptoms. Woodroof finally lost his fight with AIDS on September 12, 1992. Because he could see beyond the complacency of the medical community and sought alternative treatment options, he extended his life six years longer than his physicians thought possible.
Like Woodroof, patients with chronic lung diseases are often prescribed the traditional regimen of medications, inhalers, corticosteroids and supplemental oxygen, which only address the symptoms of the disease. Though many patients are left to research alternatives on their own, new medical advancements can now provide people with chronic lung diseases a viable treatment option. A specialty clinic in the United States, the Lung Institute (www.lunginstitute.com), treats people with COPD, emphysema, pulmonary fibrosis, interstitial lung disease and other chronic lung diseases using stem cells from the patient’s own body.
Stem cells act as the body’s healing system. The body alerts these cells when they are needed and sends them to the place in the body that needs repair. However, stem cells are slow to react, and in the body of someone with a chronic illness, they are even slower. The physicians at the Lung Institute realized this and developed a procedure to help stem cells do their job more efficiently.
Physicians extract stem cells from a patient’s blood or bone marrow tissue, separate the stem cells and return them intravenously. The cells then travel through the heart and into the lungs where they are trapped in what is known as the “pulmonary trap.” Once in the lungs, stem cells can do their job by promoting healing in the lungs, potentially improving lung function.
Although Woodroof lacked alternative treatment options in the United States, there are options available for people with chronic lung diseases. With clinics nationwide, the Lung Institute has treated over 2,000 patients. A recent study produced by the clinic indicated that 82 percent of patients saw an increase in quality of life after stem cell treatment, and 60 percent of those who took a pulmonary function test reported an increase in lung function. With medical advancements like stem cell therapy, addressing the disease at its source offers people an alternative that is helping them regain their quality of life.
If you or a loved one suffer from a chronic lung disease, the specialists at the Lung Institute may be able to help. You can contact the Lung Institute at 800-921-4631 or visit lunginsitute.com/health to find out if you qualify for these new treatments.