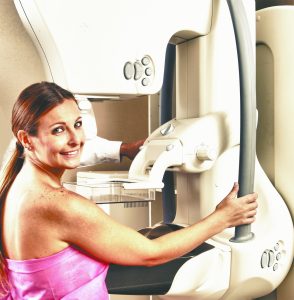 Approximately 230,000 women in the US will be diagnosed with breast cancer by the end of the year. Three million women currently have a history of invasive breast cancer.  Twenty percent of women diagnosed with breast cancer are under 50.  Forty percent are over 65.  Most importantly, 60% of women are diagnosed with early stage disease currently, and of those diagnosed early their chances of survival increases up to 98%.
What’s the big deal about screening—well, if you don’t screen for it, you often don’t find it at an early stage and therefore may miss the opportunity to cure it.
When asked about her patients’ compliance to the recommended annual mammogram, Dr. Aulls responded, “Fortunately, most women are fairly good about maintaining their health and getting regular screenings. October is a busy month for our offices because it is Breast Cancer Awareness Month, which reminds many women to schedule their annual mammogram if they haven’t already done so.”
Dr. Aulls spoke about the importance of regular screening mammograms. “The goal of annual screening mammograms is to detect breast cancer when it is still too small to be felt by either the woman or her physician. Early detection of small breast cancers by screening mammography dramatically increases the chances for successful treat of the disease.”
In the U.S., one out of eight women will develop breast cancer during her life. The earlier the disease is diagnosed, the higher the chances of a complete cure. When breast cancer is detected in the localized stage without spread to lymph nodes, the five year survival rate is 98%. If the cancer has spread regionally to the axillary (underarm) lymph nodes the rate drops to 76%.
Breast Screening Guidelines
• Women 20 years of age and older should perform breast self-examinations monthly
• Women 20-39 should have a physical examination of the breast every three years, performed by a health care professional such as a physician.
• Women 40 and older should have a physical
examination of the breast every year.
• Women 40 and older should have a mammogram every year.
If you experience unusual tenderness, pain, nipple discharge or notice a lump in your breast (even if you are in your early twenties), contact your personal physician immediately and come in for a diagnostic evaluation. Remember, the best treatment for breast disease is early detection.
3D Mammography Exam
Dr. Aulls explained the differences between 3D Mammography and traditional mammography. Traditional mammography produces four images, two per breast. Using the 3D Mammography exam, more than 100 images are produced. “Using the 3D technology, the images are clearer and provide more detail. The greater detailed images makes it easier to distinguish between breast tissue and cancer cells.”
With traditional mammography, cancer cells could oftentimes be blocked and hidden by breast tissue depending on the angle the image was taken.
When discussing the safety of the 3D Mammography exam, Dr. Aulls explained that the way they perform the exam, there is only a minimal (8%) increase in radiation used when compared to a traditional mammogram. This slightly higher amount of radiation poses no threat to the patient because the level is still well below the regulated guidelines.
Benefits of 3D Mammography
Using the 3D technology, there is a slight increase in the number of cancers being diagnosed in early stages. However, Dr. Aulls says that an even great benefit is that the number of women being called back for additional and unnecessary screening and tests has been lowered significantly. “Thanks to the 3D exam, we have been able to cut the number of women being called back needlessly in half. This translates in to fewer women being subjected to the anxiety that comes with being called in for tests that are ultimately no needed.”
When compared to the traditional mammogram, the 3D exam is performed in much the same way and generally takes the same amount of time to perform. 3D mammograms require the same positioning and compression, making the patient’s experience very similar to that of a traditional mammogram.
Does Insurance cover 3D Mammograms?
Currently, only Medicare covers the cost of a 3D mammogram and for most patients there is an extra $50 charge. However, Dr. Aulls was happy to share that some insurance carriers will being covering the 3D mammogram starting next year.
“The good news is that there are already some carriers in FL that have agreed to cover the 3D exam beginning in 2017. I expect more carriers to follow this protocol and hopefully in the near future every woman will have the opportunity to take advantage of this advanced screening technology.”

Previous Bullying Facts for Bullying Awareness Month
Next This Thanksgiving, Try This