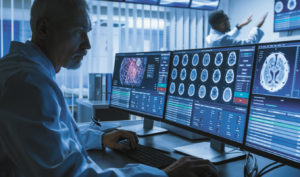 Nuclear medicine describes an array of painless, noninvasive imaging tests designed to discover, analyze and in some cases treat an array of diseases, including certain types of cancers, arthritis and bone abnormalities, gastrointestinal/stomach disorders, thyroid disease, tumors, infection, neurological problems and much more. Nuclear medicine scans utilize what are called radiotracers – small amounts of radiation that are introduced into the body either by injection or pill. The radiotracer races to the area being studied and releases gamma rays that are captured by a specialized camera and sent to a computer screen for analysis by your radiologist. Nuclear medicine scans produce intricate images that are more detailed and sophisticated than many other imaging tests, making them a highly useful diagnostic tool for more complicated systems, including the brain. Advances in the study of motion disorders reveal that one nuclear medicine test, called the DaTscan, can be of great value in differentiating Parkinson’s disease and other Parkinsonian disorders from more minor problems like essential tremors.

This is an important breakthrough in the search for treatments – and, with luck, cures – for motion disorders, because Parkinsonian disorders respond to different treatments than essential tremors. However, because of the complicated nature of motion disorders, the diagnosis of Parkinson’s is estimated to be incorrect in about 20% of cases. For patients who have a relatively benign neurological disorder like essential tremors and are given a misdiagnosis, treatment may be less effective. And the weight of being told you have a Parkinsonian disease when you don’t can be unnecessarily stressful for a lot of people.

That’s why RAO offers the FDA-approved DaTscan, which utilizes a special injectable radiotracer called Ioflupane I123. This advanced nuclear solution travels to the brain and illuminates the neurons dedicated to controlling movement. Being able to visualize this region of the brain enables your radiologist and referring neurologist to look for the deterioration of dopamine-containing neurons, which is associated with Parkinsonian syndrome. Diagnostic physicians engaged in a study of the scan’s effectiveness reported that it affected their diagnoses of 68% of patients and their clinical management of 58%, demonstrating DaTscan’s value in diagnosing Parkinsonian disorders. Best of all, DaTscan offers results in just hours instead of the longer timeframes it takes with other standard exams. That’s a huge improvement in care.

Combined with other tests and clinical evaluations, the DaTscan can help your doctor more accurately determine whether you are suffering from a Parkinsonian syndrome or essential tremor. Again, gaining a correct diagnosis assists your neurologist in prescribing the most effective treatment to help control symptoms and progression.

RAO offers the latest in nuclear medicine technology at our Medical Imaging Center at Windsor Oaks. Our Board Certified subspecializing neuroradiologists read all results in-house for ultimate accuracy and speed. If you have an undiagnosed motion disorder, or were diagnosed with a Parkinsonian syndrome and want to know more, talk to your neurologist about whether a DaTscan from RAO might be the right option for you.