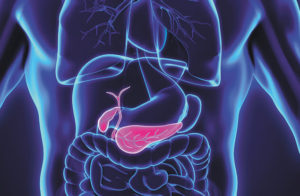 Most people live their whole lives without thinking twice about their gallbladder. Anyone who has had a gallbladder attack, on the other hand, will never forget theirs.
What is the gallbladder?
How do you know if it’s acting up? What can you do about it? This article summarizes everything you ever needed to know about the gallbladder.
Let’s start with the basics. The gallbladder is a small sac attached to the underside of the liver, below the ribs on your right. It’s primary function is to store bile. Bile is a watery mixture of metabolic waste products (such as bilirubin), bile acids (which help digestion), lipids, and cholesterol. Bile is made by the liver and travels down a tube called the bile duct which connects to the intestine. The gallbladder comes off of the bile duct like a rest stop coming off of a highway. Bile can go there to be stored and concentrated before eventually going down the rest of the bile duct to get to the intestine. The gallbladder contracts after meals to send extra bile to the intestine.
Sounds good so far. But about 10% of people will develop gallstones. Some risk factors include obesity, family history, diabetes and pregnancy. Gallstones form when the cholesterol in bile is no longer dissolved in a liquid state. When cholesterol sticks to itself, crystals form and lead to the formation of stones. Gallstones may be small like bb’s or occasionally as large as a golf ball. If the gallbladder squeezes on a stone, you will know it by a strong feeling of indigestion.
Specifically, when someone has a gallbladder attack they feel full, bloated, or gassy. Symptoms usually start within an hour of eating, especially after a fatty meal. There is often upper abdominal pain that may go around the ribs or into the back. The pain is constant and described as a pressure. There may be nausea, vomiting, sweating, or chest pain. Some people feel as if they are having a heart attack. If they are lucky, the attack will subside over a few hours as the gallbladder relaxes. Without treatment, gallbladder symptoms like this typically become more frequent and more severe over weeks or months.
In many cases a gallbladder attack lasts longer than a few hours because a gallstone has blocked the opening to the gallbladder (this is called acute cholecystitis). This means a trip to the Emergency Room followed by surgery to remove the inflamed gallbladder. Occasionally the gallbladder may be full of pus. Sometimes it can even lose its blood supply and become gangrenous. Another complication of gallstones occurs when a stone leaves the gallbladder and gets into the bile duct, leading to jaundice or even pancreatitis.
Occasionally the gallbladder will misbehave even without stones. The term for this is biliary dykinesia, meaning poor gallbladder emptying. The symptoms are the same as if there are stones. Other conditions of the gallbladder include polyp or tumor formation. Cancer of the gallbladder is very aggressive but fortunately quite rare.
The only safe, effective treatment for gallbladder disease is cholecystectomy, or removal of the gallbladder. The good news is that people live a normal life without a gallbladder. In fact, most animals that eat frequently do not even have a gallbladder to begin with. After surgery, the diet does not have to change. Medications are not usually prescribed. The procedure is done laparoscopically, using small incisions and a camera to see inside the abdomen. When done electively, it is a brief outpatient procedure with very low risk.
That is why I strongly advise to get the gallbladder taken care of once symptoms start. Avoiding acute cholecystitis means avoiding a hospital stay and a lengthier, more difficult operation. Remember the 300 year old saying: a stitch in time saves nine.
So if you are experiencing pain, bloating, or indigestion get it checked out. Your doctor will usually start with an ultrasound, as a non invasive, painless way to check the gallbladder for stones.
DIGESTIVE HEALTH ASSOCIATES, PA
BHEEMA SINGU, M.D.
Board Certified Gastroenterologogist
352-840-1001
7558 SW 61ST AVE., UNIT 1, OCALA FL 34476